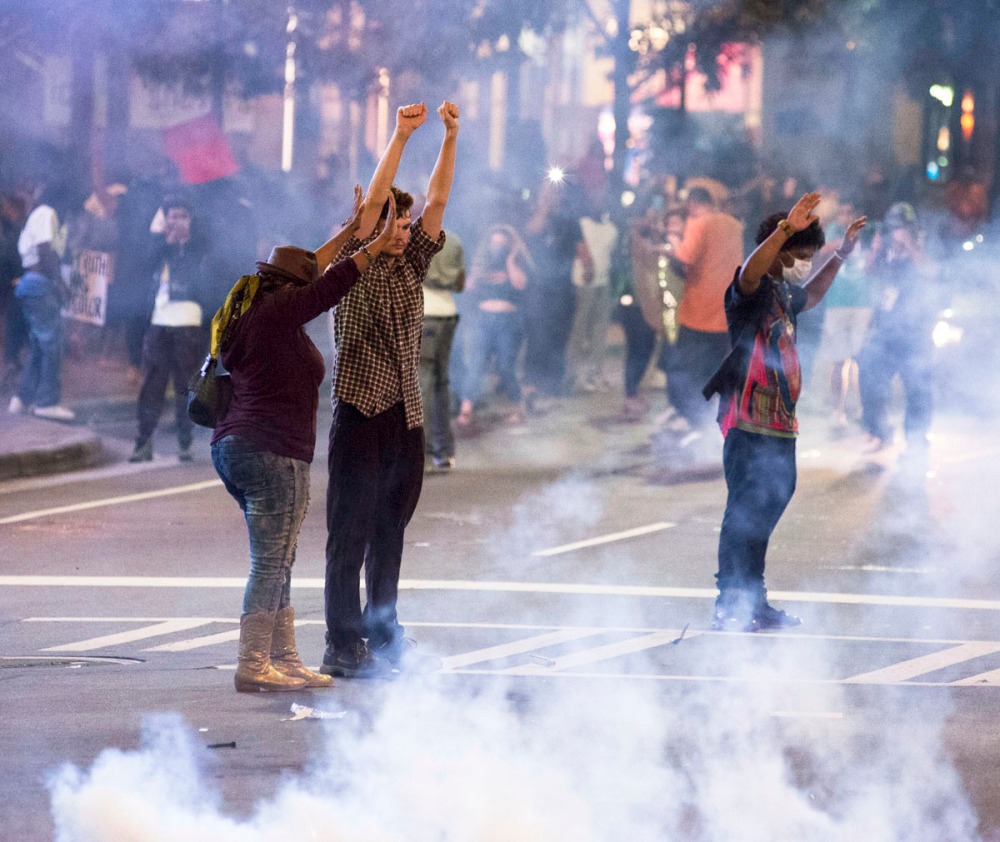 On Wednesday, Sept. 21, 2016,  protests turned violent through parts of downtown Charlotte as anger continued to build over the deadly police shooting of a black man.

Photojournalism students Molly Mathis and Tyler Brock documented the unrest and captured these images of the events.

Some thoughts from the students:

What started out as a peaceful protest that began at Marshall Park in downtown Charlotte quickly escalated into a full on riot. The destruction began at the Charlotte Mecklenburg police department where rioters were beat on the doors and brought the American flag down in front. Rioters then moved to stores and restaurants, breaking windows and some looting. This is when police began using tear gas. As a photographer, I wanted to get in the action between the police and rioters but the tear gas was so powerful that I had to step back for a minute. I was standing behind a van when a man was shot. When I saw him on the ground my head was spinning. It happened so fast and I had to decide quickly whether or not I was going to take the picture. I knew that in a few moments there would be a crowd of people around him and this would be my only chance so I snapped the picture and then backed away. I watched as media were being chased down and beaten by rioters. This combined with a man just being shot in front of me made me feel scared for my life. I decided that getting the picture was not worth risking my own safety so I left the area. I walked up the street, sat on a park bench and tried to soak in the gravity of what was happening. Molly Mathis

It is hard to come to words on how to describe the riots in downtown Charlotte last night. Water bottles and flowerpots flew through the air at the law enforcement and the police responded with tear gas. My throat and eyes began to burn. My eyes and nose were watering uncontrollably as I tried to make my coughing subside. I tried to run from the gas but it was to late.  As I stood there trying to make this horrible feeling go away, I saw people taking it like it was nothing. My thought process through the riots besides keeping my wits was how can I get unique shots while documenting what was taking place. Having a part in documenting what took place in Charlotte has altered the way I think when it comes to covering things such as this. It has also changed me personally. I will never forget this experience, the night I photographed history as it was being written. Tyler Brock